Automobili Lamborghini S.p.A., more popularly known simply as Lamborghini, is an Italian automaker specializing in sports cars and SUVs. The company is owned by the Volkswagen Group via its subsidiary Audi.

Lamborghini was founded in 1963 by Italian manufacturing magnate Ferruccio Lamborghini. Ferruccio intended for the brand to compete with the more popular Ferrari. The automaker is most noted for manufacturing cars that utilize a rear-mid-engine, rear-wheel-drive layout. It’s presently headquartered in Sant’Agata Bolognese, Italy. 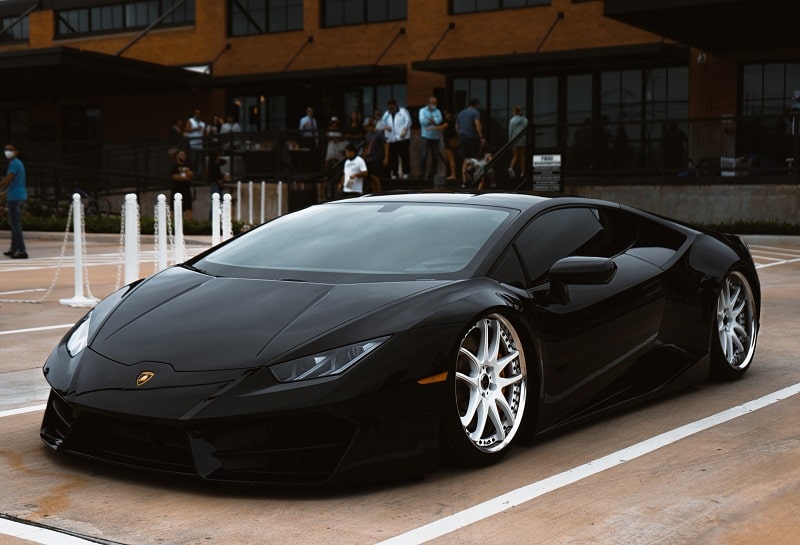 Like most automobile manufacturers, Lamborghini has experienced highs and lows in growth over the years. The automaker registered an impressive growth rate during its first decade before its fortunes began to dwindle in the wake of the 1973 global stock market crash and oil crisis.

The company would suffer a similar sales decline in late 2000s following the 2007 – 2000 global financial crisis. However, Lamborghini has always bounced back to reclaim its place among the world’s most valuable sports car manufacturers.

The Lamborghini logo sports the image of a raging golden bull set inside a shield filled with a black background. Two shades of gold outline the shield, with the outermost shade appearing darker than the innermost one.

Another element of the Lamborghini logo is the company’s lettering. The wordmark appears across the top of the shield. It’s CAPITALIZED and set in golden yellow color. Both the bull and logotype are part of the shield.

Lamborghini uses only two colors on its logo – black and gold. Black serves as the background color, whereas gold is used for the bull, wordmark, and the shield’s outlines.

Across the three corners of the shield is what appears like a shade of grey. However, this color isn’t conspicuous enough in most versions of the Lamborghini logo, and is often dismissed as black. The Lamborghini logo uses a script font known as La Macchina. La Macchina was designed by Michael Hagemann. The typeface is published by FontMesa Type Foundry.

It’s available only in the Regular style. However, the single version supports UPPERCASE and lowercase letters, as well as numbers, basic punctuations, mathematical operators, currency symbols, letterlike symbols, and other special elements. The main reason Lamborghini adopted the bull image is that the company’s founder, Ferruccio Lamborghini, was born on April 28. Astrologically speaking, Lamborghini was a Taurus considering that his birthday fell between April 20 and May 20. Note that the Taurus zodiac sign is represented by the bull.

Another reason the automobile manufacturer settled on the bull for its logo design is that Ferruccio Lamborghini was passionate about bullfighting. He regularly attended bullfighting events right from his childhood through his adult life. So, when it was time to design a logo for his company, he couldn’t think of a more befitting design than that of a bull.

Lastly, the bull connotes with power and speed. The company adopted this symbol as a message that its automobiles would utilize powerful engines that translate to better speed and stamina.

Related:  Lamborghini’s Logo Font Is Just as Stylish as the Company’s Automobiles

The word “LAMBORGHINI” appearing on Lamborghini automobiles mainly serves to emphasize the brand. It’s also a direct tribute to Ferruccio Lamborghini, the founder of the sports car manufacturer.

Symbolism of the Color Palette Black is the color of power, elegance, and royalty. It’s not difficult to see that Lamborghini cars boast these three attributes.

The golden color utilized for the bull and the shield’s outlines is also symbolic. Gold connotes with wealth, success, luxury, and elegance. Owning a Lamborghini ride is undeniably a mark of wealth and high social status.

The first Lamborghini logo appeared in 1952. The logo consisted of a simple triangle. Each of the triangle’s three sections included the initials F, L, and C, standing for Ferruccio Lamborghini Cento. Another interesting thing about the original Lamborghini logo is that the wordmark featured three different fonts.

But how come this logo preceded the Lamborghini company by more than 10 years? Well, it’s important to note that Automobili Lamborghini wasn’t Ferruccio’s first business venture. Ferruccio had already dipped his toes into the world of automobile manufacturing several years earlier. As Lamborghini toured the ranch, he was captivated by Miura’s bull. Since he already had a deep passion for bullfighting, Ferruccio chose the image of a raging bull for his company’s emblem. Automobili Lamborghini used the original logo until 1972. The first major redesign of the Lamborghini logo happened in 1972. It mainly included incorporating the name “LAMBORGHINI” into the shield. The wordmark was written in Univers Black Oblique font and set against a yellow rectangle. However, some versions of the logo still displayed the inscription outside the shield.

Lamborghini uses one of the most iconic logos of all automobile manufacturers. The logo is easily recognizable, thanks to the image of a golden snorting bull set in a shield with a black background.

Although a few elements of the logo have changed over time, the main highlights have remained the same. That’s mainly because the graphic image was inspired by Lamborghini founder’s passion for Spanish bullfighting.