The Walt Disney Company, simply known as Disney, is an American multinational media and entertainment conglomerate.

Disney was founded on October 16, 1923, by brothers Walt Disney and Roy O. Disney. The company is presently headquartered in Burbank, California. Disney originally majored in animation before diversifying into other areas, such as live-action film production, television production, and theme parks.

Appearance of the Disney Logo

The Disney logo is based on Walt Disney’s stylized autograph. The graphic image is the official corporate logo of The Walt Disney Company. It also appears in several other Disney divisions and products, sometimes with slight variations.

The Walt Disney logo features two main elements – the colorful castle design and the phrase “Walt Disney Pictures.” Many earlier versions of the emblem also included the company name. However, the logo has changed its style remarkably since 1937.

The remaining letters in the Disney logo are also quirky in their own way. For instance, the letter “T” looks more like a stylized “Y.” Also, the dot above the letter “I” resembles a large circle crossed out diagonally. All these features were incorporated to make the Disney logo easily recognizable.

Another notable element of the Disney logo is the Cinderella castle. The castle appears complete with towers, windows, balconies, and a moat. The castle design appears even more stunning in animated versions. 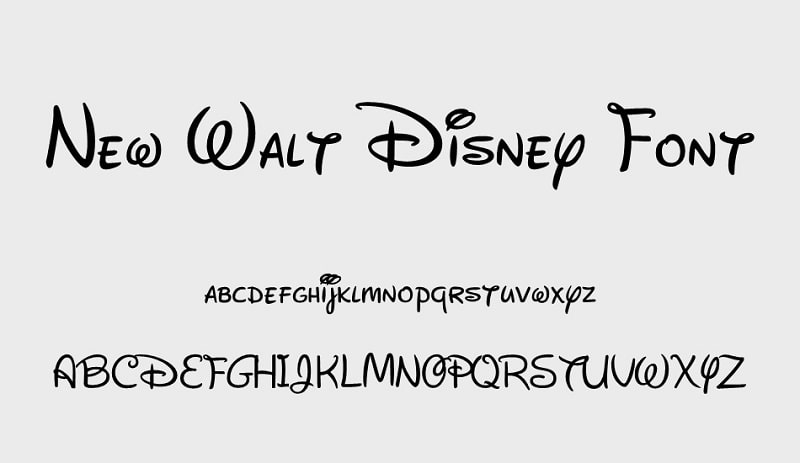 The Walt Disney Company logo isn’t based on any official typeface. In other words, the company’s word mark uses a custom font.

But in 2000, Justin Callaghan decided to recreate Disney’s original font using existing typefaces. The font was originally known as Walt Disney Script but was later renamed the Waltograph in 2004.

Waltograph was developed in two versions, namely the Regular Style and the Bold Style. Each style comes with UPPERCASE and lowercase letters, plus several other special elements.

For clarity’s sake, it’s important to note that Waltograph isn’t based on the actual handwriting of Walt Disney. It’s rather an extrapolation of the Walt Disney Company’s word mark.

But while Waltograph isn’t the official Disney font, the company has used this typeface on some occasions.

The main purpose served by the stylized signature of Walt Disney on the Disney logo is enhancing the design’s appeal. The choice of this signature might have been an ingenious way of paying tribute to Walt Disney.

However, the autograph has delivered far beyond its original intention. Note that Disney is one of the very few globally renowned brands that utilize a signature on its company’s logo.

The castle on Disney’s logo evokes the images of fantasy, wonder, and imagination; the same that most Disney animations are known for. Like many popular brands, the Walt Disney Company has undertaken numerous upgrades to its logo over the years.

Up until the early 70s, the Disney logo featured either one of Walt Disney’s two older signature versions, including one with careless lines and one with connected letters. But after Walt Disney died, the new company leaders adopted the original versions of his signature.

Here’s how Disney’s logo has evolved over the years;

Note that this is the period Walt Disney developed Mickey Mouse, his most popular animation character of all time. So, the inclusion of the Mickey Mouse drawings in the logo pretty much depicted what Disney was working on at the time. The mouse design was set against a black background.

Besides the Mickey Mouse, Walt Disney’s name also appeared in two parts on either side of the company’s mascot. Other elements in the logo included the inscription “Walt Disney Productions” and the address.

In 1937, the Walt Disney Company designers redesigned the company’s original logo and made it larger.

The inscription appeared in both UPPERCASE and lowercase letters. The capital letters “W” and “D” were twisted, whereas the small letters “i” and “y” were slanted to mimic the ears and tail of the Mickey Mouse.

The main upgrade this year was the changing of the logo’s inscription from “Walt Disney Productions” to “Walt Disney.” The new word mark looked like it was handwritten. It also did not have the prominent slope visible in the logo’s previous versions.

In 1972, the Walt Disney Company designers decided to experiment with the style of the brand’s original logo. However, the new logo was more legible than its predecessors.

Another notable change was the re-introduction of the word “Productions.” The word was executed in a smooth, clean sans-serif typeface.

During this period, the Disney logo appeared in a serif typeface. The new font further enlarged the company’s mascot and lettering. The lettering “Walt Disney” remained. However, designers introduced the word “Pictures” as a replacement for “Productions.”

1985 saw the introduction of Disney’s Cinderella castle on the brand’s logo. The light blue castle was set above the word mark “Walt Disney.” A triangular flag could also be seen on top of each castle tower.

Besides, the animated castle seemed to emerge from a ball of white light. Behind it was a shooting star drawn in the shape of an arc. The castle featured a lighter shade of blue while the entire logo appeared on deep blue background.

The word “Pictures” retained its serif typeface. However, it became larger and bolder compared to previous designs.

This period was mainly characterized by the refining of the Cinderella castle. The towers, windows, balconies, and flags became more prominent. The rooms glowed brighter and the entire design debuted in full colors.

Also, the text “Walt Disney Pictures” became smaller relative to the castle. This was definitely a move to shift focus from the logo’s lettering to the castle design.

In 2011, Disney removed every element underneath the castle emblem, except for the single word “Disney.” However, the logo still appears with the phrase “Walt Disney Pictures” in numerous versions.

Walt Disney’s signature is considered the most recognized in history. The autograph has been the main inspiration behind Disney logo’s visual appeal for years.